Depending on whether you’ve been naughty or nice in 2019, Santa will be making his way down your chimney (or in these more chimney-less times, maybe through the heat-pump...?).

Word is old Saint Nick is partial to a pint, so what beer will you be leaving out to reward him for his thirsty work?

We had a word to some of his elves, and they let us in on some of Santa’s wishlist beers from these Beervana breweries.

When Santa’s sleigh crosses the equator into the Southern Hemisphere, he leaves behind the snow, mistletoe and all those very un-Kiwi Christmassy tropes. Here’s some beers to get him into Godzone summer mode.

Duncan’s - Pawpaw Party Smoothie IPA - Does what it says on the can. A tropical holiday and pawpaw party in your mouth right here in good old Niu Zild, this hazy style IPA is smooth, fruity, thicc and juicy.

Mean Doses - Mean Summer Summer Wheat Beer - Mean Doses admits this beer is a mash-up between a lager and wheat beer, Doesn’t matter - they’re both great summer drops. Do you need to draw lines between everything? It's floral and hazy, and it sort of tastes like citrus.

Funk Estate - Raspberry Beret Raspberry Lemonade Cider - When you were a kid, your go-to tipple was raspberry and lemonade. Crank up some Prince, and give Santa the gift of the grown-up version in tart, juicy cider form.

Sunshine Brewing - East Coast Saison - You can’t go any further for a summery beer than a brewery named after the main authority on summer. This fresh, funky, citrus-y Farmhouse Ale took out the Brewers Guild of New Zealand European Ale Trophy and a Gold Medal last October.

Beer Baroness - Drink Pink, Darling Rosé Beer - Nothing more summery than a glass of rosé. This is a beer, but brewed with strawberries, peaches and cranberries, used to replace the usual addition of hops. Flag the wine glass, and drink by the pint.

Delivering pressies is hard slog, and we suspect Santa needs something quenchable as for the palate.

Urbanaut - Beer Blender Shandy - Your nana loved a shandy, and we’re pretty certain Santa would too. This is the ultimate summer collab between Urbanaut and Karma Cola to bring you a Shandy Pack! It’s the latest in Urbanaut’s Beer Blender series. Simply separate the cans, try each one then blend together in a glass to create Aotearoa's most delicious and refreshing shandy. You always knew your nana was a badass, and this beer is the proof. 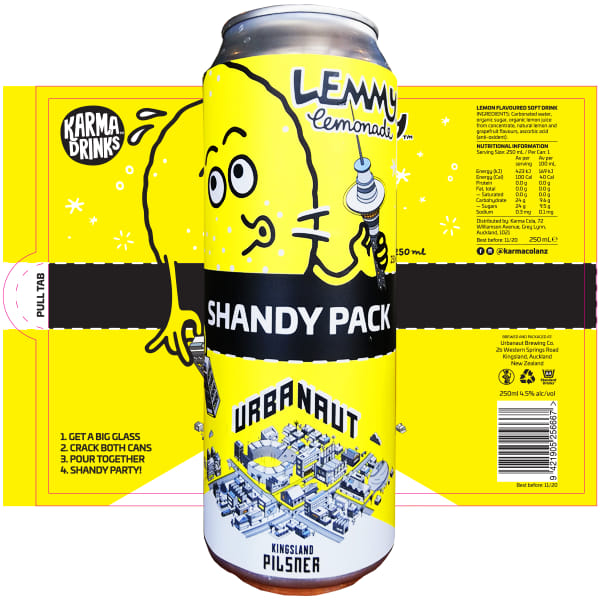 Liberty Brewing Co. - Divine Wind Dry Lager - As refreshing as the breeze blowing through Santa’s beard as he sails across the night sky in his sleigh. A dry lager brewed with our Liberty’s own malt, rice and noble hops.

8 Wired Brewing - Cucumber Hippy Berliner Weiss - You know how people drop a bit of cucumber into a glass of something to make it all cool and refreshing? Well, 8 Wired have done this to its Berliner Weiss, which bursta with sweet, clean cucumber notes, balanced by lemon peel and tropical fruits. Fancé.

OK, so we bagged the Northern Hemisphere Christmas tropes further up in this blog, but let’s face it. It’s hard to think of Christmas without flavours of chocolate, cinnamon, oranges, cherries and spices. These are rich, moreish and indulgent beers - perfect for putting your feet up at the end of a long slog delivering pressies.

Tinker Tailor - Chocolate Orange Stout - Reminiscent of Terry’s Chocolate Oranges one often finds under the tree on Christmas morning, this stout presents orange aromas, followed by the classic, yet subtle orange chocolate combo. Tinker Tailor also used a bit of lactose to create some creaminess to play up those choccie notes.

Wilderness Brewing - Cerise Dark Barrel-aged Saison with Sour Cherries - This dark saison spent ten months in a freshly emptied Canterbury wine barrel on top of Canterbury raspberries and Otago sour cherries. One to sip away at at the end of a long Christmas day.

Lakeman Brewing Co. - Hairy Bogan Imperial Bourbon Stout - A black stout with orange and chocolate notes balanced with the pleasant after taste of bourbon, which comes from the aging process on bourbon oak and cellared for a year before release.

Double Vision Brewing - Magic Bean Stout - Imagine the most beautiful milk stout in all the land. Now make it with enough flavour for giants: infuse it with cacao, Flight Coffee and vanilla beans, then cross it with a kick of a Thomson Manuka White Whisky.

Kereru Brewing - 12 Days of Christmas Mixed Case OR Fab-Yule-Ous Fig & Pohutukawa Golden Ale - You’ll really be in Santa’s good books if you leave him one of Kereru’s Yuletide mixed combo - one bottle a day leading up in the 12 days of Christmas! Or wish Santa a Meri Kirihimete with the very Kiwi, Fab-Yule-Ous Fig & Pohutukawa Golden Ale, a special Yuletide release. This festive brew hits that sweet spot between rich, heady, Belgian malted magic, with fresh honeycomb and toffee-brittle notes, alongside fresh hop and fruity, peachy perfection.  Hints of Christmas pudding spice and figgy layers sneak through.

Mac’s - Mid Vicious Session Pale Ale - Unlike the errant punk for which this Session Pale Ale is named for, this is 2.5% keeps its hoppy flavour blaring, but cuts the alcohol content in half. Pop it on Santa’s nice list.

Croucher Brewing - Lowrider IPA - At 2.5%, this full-flavoured session India Pale Ale serves up massive hoppy notes and malty character at a lower octane - for a smooth rider with flavour cranked all the way up. Smooth sailing for Santa’s ride.

Garage Project - White Mischief Salted White Peach Sour - Though Santa is making a list and checking it twice, he doesn’t mind a little mischief once in a while. This 2.9% kettle-sour is lightly salted and infused with white peaches - a delicate three-way salty, sweet and sour balancing act.

Saisons Greetings from the Beervana crew!